Friday at Pitchfork is always a little light. People are getting off of work and barely making it there by 6. Having gotten into the festival around 4:30, a good share of time was spent in the myriad of lines it takes to consume a single beer. Holding on to my now warm beer I headed to Sharon Van Etten. Her latest album is self produced but you can still hear Aaron Desser’s influence. And on that note we kicked off Pitchfork 2014.

The grand daddy of indie, Beck, opened up with “Devil’s Haircut” shredding notes from a fluorescent guitar. With geometric numerology playing on the screen the crowd dove right into the set. Beck knew exactly where and who he was playing to and he gave us the hits. All of the hits. With no breaks between songs there was complete fluidity. When the band played “Loser” a scream erupted from the crowd with at least three generations singing in unison, solidifying the reason why we were all there. Each song is different: funk, soul, rock, dance. Beck definitely has a gift for giving a musical whiplash in really a good way. 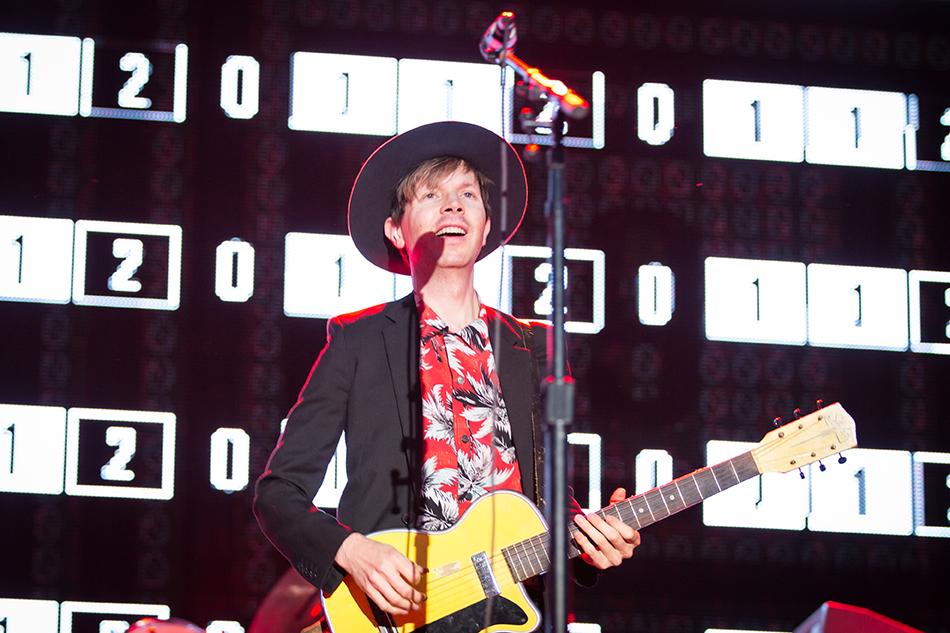 It’s a common knowledge in Chicago that by law all outdoor concerts must finish by 10pm but Pitchfork sometimes gets away with a late call. Beck’s band asked the crowd to defy? While my mind wondered into all sorts of law breaking actions Beck went into playing “Sexx Laws” – so much for walking on the wild side. The band finished up with “Where It’s At” making it a perfect evening of the first day.

The next day, in true hip hop form, Pusha T came out on stage about 30 minutes late. His rhymes hit so hard that even the bitty babies by my side were bopping along. Pioneer of coke rap is truly cerebral. 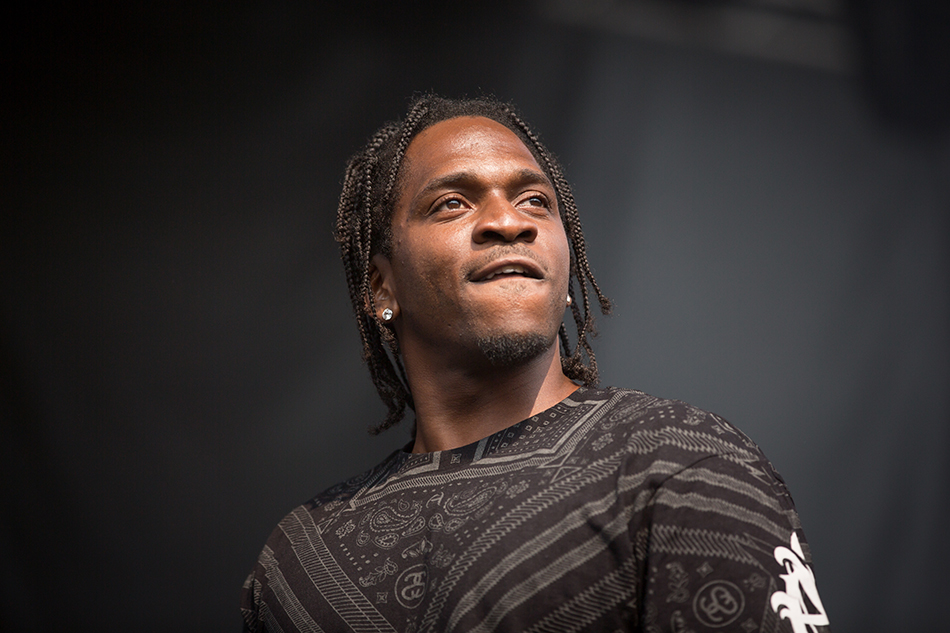 When the neon tribe of tUnE-yArDs took the stage it was obvious they see themselves just as much performers as they are musicians. Playing a good combination of WhoKill and Nikki Nack. Personally Nikki Nack is a little too experimental for me. I feel WhoKill has far more of a dance vibe. She did recreate Gangsta sonically and verbatim, how it appears on the record, which is seriously impressive.

Danny Brown did us all a treat by having his producer, Sky Walkr, on stage  with him who quickly got the crowd hyped up with a “TNGHT” beat.  When Danny finally got up on stage he was steezed to the dome. Literally, he has teal colored hair. His whole set is a dance party fueled by joints and beers. Smokin’ and Drankin’ y’all. 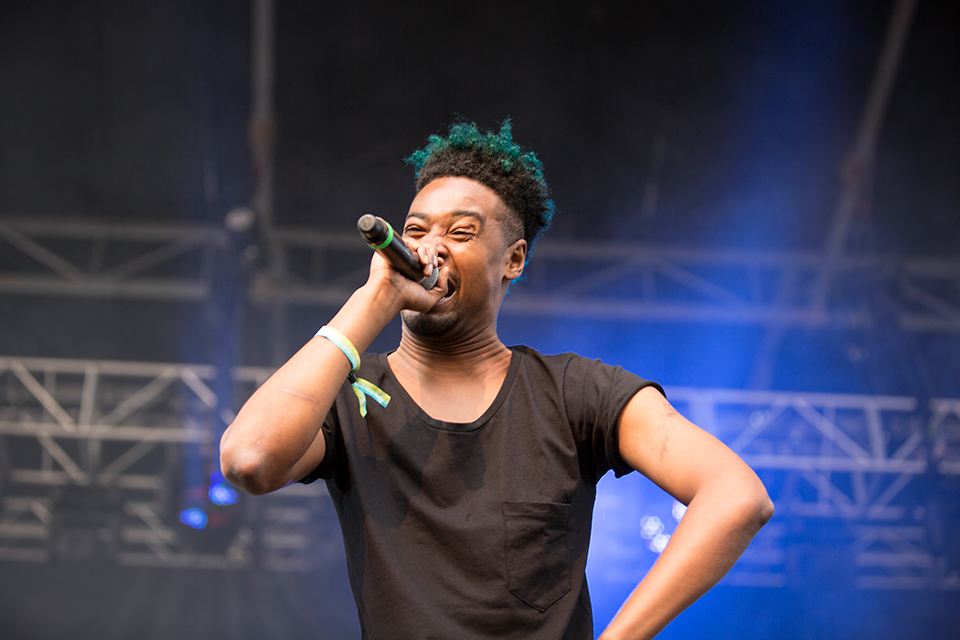 Now for the best 45 minutes of the weekend, and maybe the year – Annie Clark and St. Vincent absolutely stole the entire weekend right under from every body’s feet. To no one’s surprise Annie Clark hit the stage dressed as a blend of a Geisha Robot and a hunted vixen. At times she is coquettish and demure (but than again, she has been referred to as the darling of indie rock) and other times she looks like she can eat you alive. I’ve said this before and I’ll say it again, Miss Annie Clark is the baddest bitch on six strings.

Clark opened with “Rattlesnake” and from there on we were taken on a ride. During “Cheerleader” like most people in the crowd I was covered with chills. When “Huey Newton” started, to date is one of her best solos yet, boys and girls alike were losing it left and right. Annie invokes Beatle-mania like screams in the crowd. For “Bring me Your Loves” Annie and her keyboardist broke out into a synchronized dance that continued into “My Lips are Red” which quickly turned into a psych rock freak out: Annie is trashing and riffing on the shoulders of a security guard burying her face into the crowd screaming “CMON!” After hopping back on stage she flang her guitar off with an emphatic ‘fuck’ and collapsed in passion on the ground. We think she’s done, but the song isn’t over. Clark was revived by a beautiful white guitar finishing out the song. This is a set that will be referred to for years, zeitgeist in motion.

Neutral Milk Hotel was a good way to come down after Annie’s jolt heated up the festival goers. The set started with favorites like Holland and King of Carrot Flowers, Part 1 &2. And they of course serenaded us with “Aeroplane of the Sea.” Neutral Milk Hotel has a tendency to turn the crowd into wild spurts of jubilation and then bringing them back down into a syrupy stupor – great way to close out Saturday.

Sunday begun in the beautiful reprieve hat is the Blue Stage. The natural shade from the trees makes it a good place to take a breather. Speedy Ortiz was the first set of the day fronted by Sadie Dupuis. The crowd is head bopping and shuffling but you can tell the weekend is starting to wear on us. 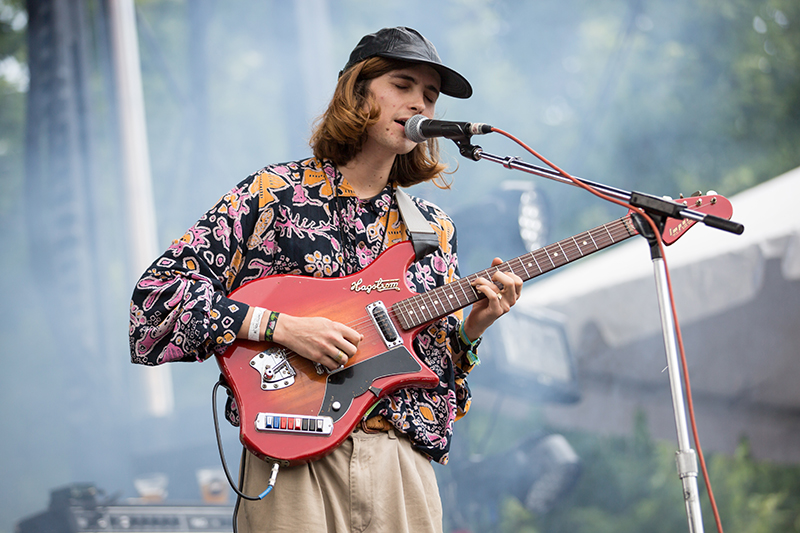 Next up were DIIV, the musical equivalent of marathon runners. They never put down their instruments,  the sound was ubiquitous, and throughout the set they played some new tunes which were pretty well received. DIIV finished their set with Bob Dylan’s “Like a Rolling Stone” which in reality is more like Bob’s Lyrics put to DIIV’s melodies.

Probably one of the more rare performances of the weekend was Earl Sweatshirt who had cancelled his entire tour except for Pitchfork. Once he came out on stage it was obvious why – Sweatshirt is ragged from the fame. Skinny and over-worked he’s definitely ready for a break.

Pitchfork 2014 was everything I hoped it would be and some stuff I didn’t want (but scars are sexy right), the breeding ground for the best band T-shirts around and one of the only places in Chicago where you can find Sleater Kinney vinyl. Until next year kiddos.