Three performances. Second night of EM15. One astonished girl. EM15’s A/VISIONS 1 has been the most creative line-up of performers I have seen thus far. This three-hour event which ran on May 28th from roughly between 7:30 PM to 10:30 PM at Cinéma Impérial was a sold-out show with Mantra Percussion, Nicolas Bernier/Martin Messier, and Nonotak, and for a good reason. Let’s paint this jaw-dropping, visual and aural experience from the perspective of one who got there early enough to get a front-row seat.

Mantra Percussion, a six-man group from New York, was the first act of the evening, performing “Timber” with their hexagonal instruments comprised of what appeared to be 2 x 4 lumber of different lengths. The wood pieces are the platform of their sound creation and are laid horizontally and propped up from the floor at hip-length. Colourful strobe lights lay at the feet of the stands on each side, matching the tempo of their drumming. If the sound of a construction site with men hammering on wood was what you were expecting, it would not be the case for “Timber.” Instead, the audience gets intrigued by an echoing, rainforest-meets-tribal soundscape. 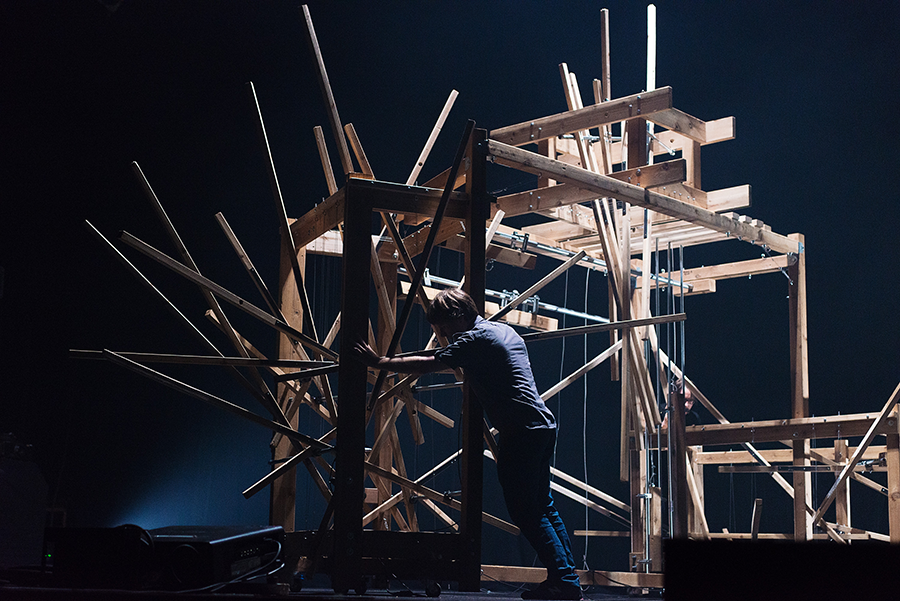 Using what looked to be bass drum mallets as well as their own hands and sound effect pedals as a means to generate the sound, their set was a manifestation of how human hearing functions: the dynamics of sound being heard from afar versus being heard within close range via the distance and placement of where they were drumming on the wood. The closer to the middle that they drummed the more vibrant and concentrated the sound. Whereas, the farther they drummed towards the ends of the wood, the more panned and distant the sound became (eg. think of your ear drum being at the center of the wood panel and your ears being at the ends).

At the beginning, all members were drumming at same time, but transitionally, they began to use their circular position surrounding their hexagonal instrument by means of playing one after the other repetitively which intensified their sound. With their progressive and varying intensities, speeds and sequences of each member drumming, you can imagine the swirling effect of the sounds panning in and out, as if going through a reverb-filled vortex.

Along the lines of incorporating wood into their performance (but on a completely different level and scope) was the work of Montreal-based Martin Messier and Nicolas Bernier, MACHINE_VARIATION. The ingenuity of their wooden/industrial machine – an incredible structural piece on its own – was personally the most eye-widening and jaw-dropping sculpture put into action I have ever witnessed. The sheer performing aspect of Messier and Bernier as they come onto stage with a determined composure and act as one with their machine was quite the experience. This massive, rotatable structure on stage – designed to perfection and comprised of long, wooden beams fixed together in a criss-cross arrangement, with metal rods, hooks, and vertical wires all operating cohesively – already has the audience captivated. But, when the sounds of feedback and mechanical processing start, so does the mechanical operation of Messier and Bernier. 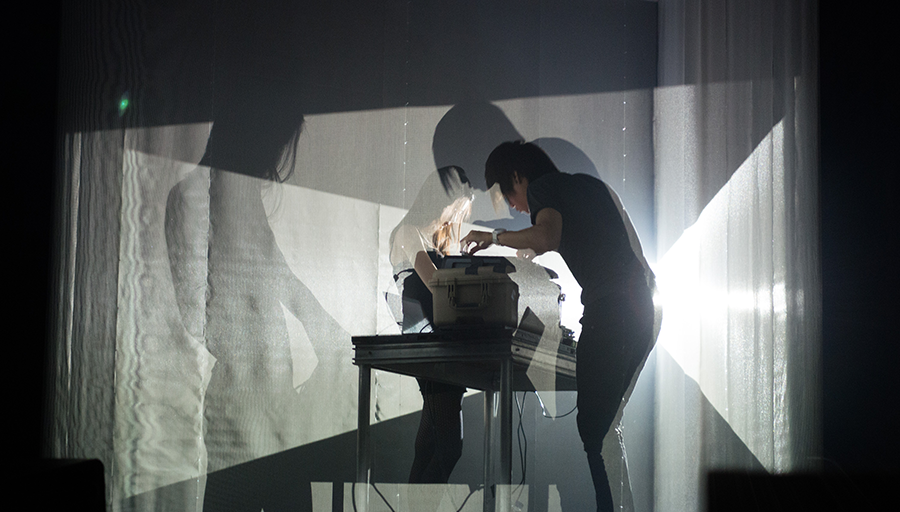 It truly is a physical performance to undergo for both performers and also gets you to the point of not being able to blink for fear of missing one of their very rigid and addictive movements. Both pull, lift, shake, and slam the moveable, wooden levers fiercely and with such timely precision along with the sequencing of sounds that you really believe the structure they built is an extension of themselves. I definitely commend them as I would assume that with such force and constant grabbing and slamming of the wooden pieces, they would have handfuls of blisters. Their physical performance alone of constantly being in motion and walking towards different areas of their structure was impressive and you can see the sweat building and their bodies becoming slightly overworked – a perfect way to get fit and perform an astonishing work of art.

The final performance, LATE SPECULATION, was nothing short of spectacular. Paris-based, Nonotak, presented audio-synced projections through opposing projectors, while operating techno-glitch music inside triangular-prism-shaped screens. With one of the screens facing frontally for the audience to view and the two other sides receding into the back of the stage, various white geometric patterning, flashing, sliding side-to-side, inwards and outwards, as well as an array of neon green horizontal lines segmenting the screen, created a digital, rave-infused atmosphere. It’s an interesting concept to watch sound designer, Takami Nakamoto, and visual artist, Noemi Schipher, literally inside their own creative zone and dancing to their work (Nakamoto controlling the beats, of course, doing the majority of dancing), while the audience watches them.

Their performance is the type that can be enjoyed and appreciated from both the audience and the performer’s point of view. From the audience viewing, it’s a visual pleasure in our modern age to watch digital projections flashing and syncing to music that will, at the least, make you tap your feet to the beat if not have you dancing in your seat. But surely it’s an energetic and sublime feeling to be the performer in the center of the projected lights that encompass the work space.

The performances in A/VISIONS 1 are exactly the kind of line-up that is expected from MUTEK and ELEKTRA’s festival – the type to blow your mind with the creativity and originality of artists.