At just 20, English singer-songwriter Laurel Arnell-Cullen, better known as just “Laurel”, is quickly sweeping across the Atlantic. With her recent Canadian debut at Toronto’s NXNE festival, the whimsical Southampton native, who now calls London home, is anticipating the 2015 release of her first full-length album, a follow-up to her 2014 EP To the Hills. Mixing introspective lyrics with a sultry vocal quality that has drawn early comparisons to Lana Del Rey, Laurel is an open book both as an artist and human being.

Joining Quip for a coffee and chat, the gregarious, willowy songstress (who, as evident on her blog, is also a dedicated fashionista) spoke about moving to London, making it as a musician, and who/what inspires her to create.

Laura Eley: How old were you when you moved to London?

Laurel Arnell-Cullen: I had just turned 18. I’d just finished college and the owner of the label hadn’t signed my deal yet, but she was like “Laurel what are you doing tomorrow?” and I was like “I don’t know, I’ve finished college now forever, just watching T.V. every day.” And she said “Ah, okay, well come to London tomorrow because we might go to America next week.” So I just went up and I never went home. I never “officially” moved to London, it was never a conscious decision.

LE: Was it overwhelming?

LAC: It was very exciting at the time, but everything happened so slowly that it’s never like a flash of everything happening at once. So, you learn not to get too excited about that many things, which I guess is a bit sad in a way. The only thing that was hard was I didn’t know anyone, and it suddenly occurred to me: “How do you make friends with people?” That was the first time I haven’t been pushed into a situation like school or college where everyone has to make friends with each other because no one knows each other. I’m in London, a city where I could do so much stuff, I’m living on my own, I’m away from my parents, but I don’t know a soul in this place. I’m fine now after two years, but the for first probably two or three months it was just very alienating.

LE: Did you meet people through the music industry at all?

LAC: Not really, actually. I have a few friends in the music industry, but I was 18, and I was going into writing sessions, and I wasn’t writing anything with people the same age as me. All these producers that you go and write with are 40-year-old men that have got families. It was all like their job, they’d been doing it for so long, you’re just an 18-year-old, you know? So that’s also what it was, like “Oh I’m in a job, but I can’t even meet people through my job.” Because for an artist, your job is your life. But for managers and A & Rs and stuff, it’s more like a job for them. You kind of forget that. 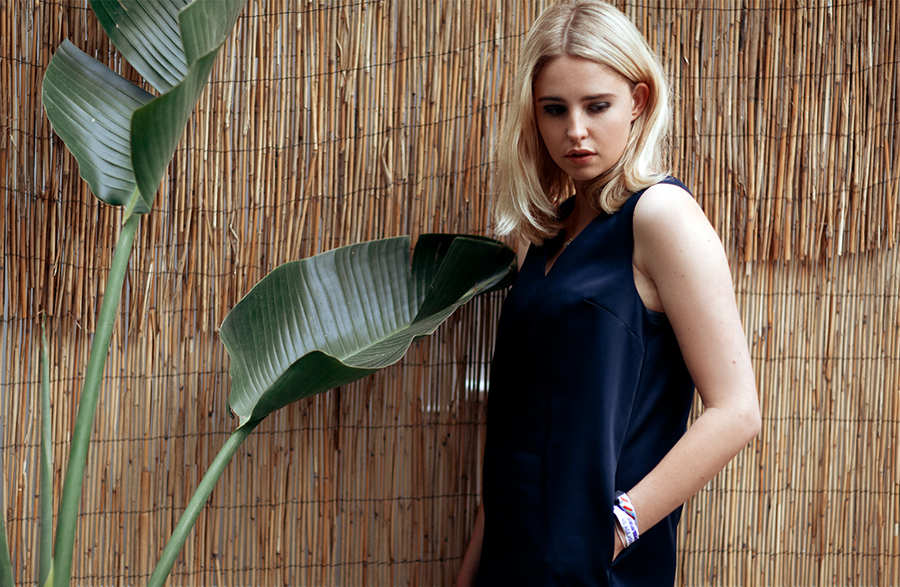 LE: How did you get started making music?

LAC: I started when I was really young. I’ve always loved music, I’ve always sung since I can remember – which sounds kind of cheesy, but it’s true. When I was about 13 or 14, I’d heard Laura Marling. When I found her she was 17, so we were very similar ages and I’d started listening to her music, and she was doing guitars and just writing these beautiful, poetic lyrics. And I was like “I want to do this.” I always wanted to do music, but I didn’t know – I wanted to this type of music, I wanted to be an artist and write and play the guitar. So I started learning the guitar then.

LE: Have you met Laura Marling?

LAC: I’ve met a few of my idols before and it’s ruined it. Not because they’re not nice people, but I quite like to keep her on this pedestal in my head. Like in my head, Johnny Flynn, he was sort of on an equal level of influencing me, and I’m actually playing a festival where I’m supporting him and I don’t want meet him, I’m really gutted. I’m sure it will be fine, but they’ll be so normal – like me. And I don’t want them to be. They’re poetic geniuses.

LE: Have you been working on your debut album?

LE: And the album was all done in your flat?

LE: Do you think it would’ve turned out differently if it was recorded in a studio?

LAC: Oh my God, yeah. Because I’ve written it all on my own, and I’ve produced it all on my own. There’s not been one person in that room to tell me to change my ideas, so essentially the album is one hundred percent what I want it to be. If someone else was there in the studio telling me “Oh, I don’t like that bridge” or “That lyric doesn’t really make sense to me”, it wouldn’t have been my work. I did try it that way for a long time and I found it hard to connect with the songs. I had written them, but they didn’t feel like mine, I felt like I was writing them for people to like, whereas the music I’m writing now I’ve never had an intention of writing it for people to like. If people like it then that’s really good, and of course I want people to like it, but it’s just really a diary entry for me. I write it because I feel really upset about something or pissed off.

LE: Does the music become more precious because of that?

LAC: Definitely. If someone doesn’t like something, if your song doesn’t do as well as you think it’s going to do, it’s upsetting because it’s you; it’s like someone saying they don’t like you. And also being a female artist that wants to produce and do everything herself, you have a lot to prove. There’s been a few that have said “Are you sure you can do all this on your own?” My label’s been so supportive, but of course people are out there to trip you up a bit and you have to prove to them that you can do it.

LAC: In a way it was, I was about to go to America. It’s more about getting to somewhere higher than you are, and never being happy. Like, you always want to be higher and higher, whether that’s like someone getting drunk or taking drugs, whether that’s with your career or someone loving you. So, it’s got a bit of darkness to it, but it’s also uplifting, like I want to be higher than where I am. A lot of references to running away; I lived in a suburban town so, at the time I’d gone home to visit my parents and was like “I want to be somewhere bigger than where I am.” L.A. is very like that. A lot of people go there to make their dreams come true, so that was in mind.

LE: Are your parents supportive?

LAC: So supportive. My mom’s like my number one fan girl. It would be hard if my parents weren’t supportive.

LE: What are you most looking forward to in the next year?

LAC: I’m really looking forward to getting my album out. I just can’t wait to have a body of work out there. Now I know what it is and I just want to show people, but you have to wait and be patient. I’m excited to release my new single “Blue Blood”; it’s a demo I put online a year, a year and a half ago, and we’re going to release as the first single in October. But we’ve redone it with real strings, a 24-piece string orchestra and remixed it and stuff.