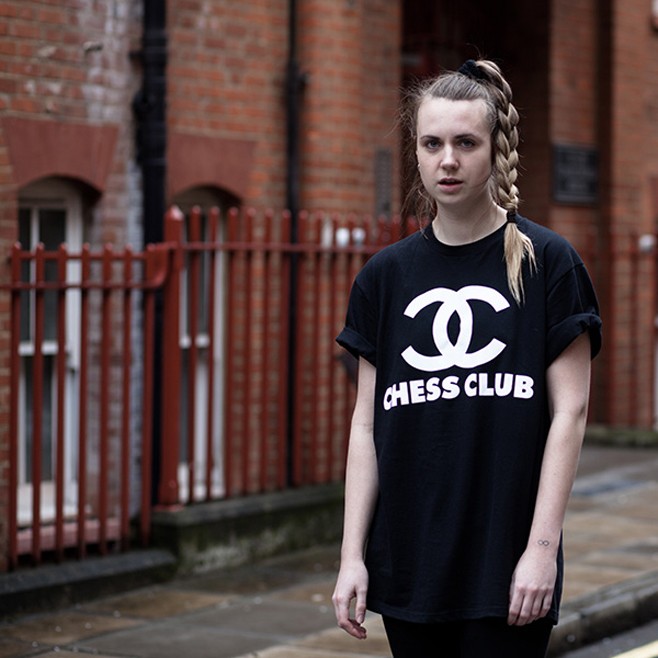 The “Polar Vortex” that shut down the Northern half of the continent for the majority of 2014 is now just one of those things you drudge up whenever your kids complain about having to walk to school. (“You think this is cold? Back in ’14 we put things in the fridge to warm them up!”). It’s warm now, and this is the weather that outdoor festivals grow in, luring music lovers with the promise of lots of bands communing with Mother Nature in harmony.

And that’s awesome, sitting outside in mud and listening to 6 bands at the same time while getting sunburned rules. But it’s important not to forget the clubs. The stuffy, stalwart music venues who were here all winter and will be here all summer –with air conditioning. MØ’s show, which happened at Lincoln Hall, is an example of what a visceral treat a club show can be. Through comparing and contrasting we can see why club shows like hers are the best way to enjoy music.

MØ –which means “maiden” in their native Danish- is a four-human band consisting of electric guitarist, drummer, electo-drummer/computer guy, and, of course, Karen Marie Ørsted on heavily enhanced vocals. The tone is moody and danceable, its music meant to be felt, not just listened to, and Lincoln Hall’s incredible 45-gazillion-watt amps not only make the listeners’ hearts skip on tracks like “Don’t Wanna Dance” but it actually makes geologists in white lab coats grab the red phones in their offices as their seismographs sketch record-breaking tectonic activity. Yes, the big festivals have 20-foot tall towers of speakers stacked on top of each other that require their own nuclear reactor to power, but when most of the noise is floating off into the atmosphere, there isn’t much of a bass kick.

Intimacy is a hallmark of MØ’s sound. Many of her songs are about love or heartbreak, and when she sings them she means it. It’s in her eyes, which you can see in a club because the stage is right there, a short crowd-surf away. MØ takes full advantage of the stage and the venue: she climbs onto the bar, she hops onto the speakers, she disappears for a while then reemerges with an “I’m over here!” and now she’s in the balcony. For her last couple songs she stage dives into the center of the capacity crowd and continues singing- a real pro. She’s set down in the thick of the pit and begins whipping her hair in a small Nordic tornado, creating a circle of standing bodies around her. If she tried that at a festival forty sweaty security guards would bounce her butt back on stage faster than twenty dollars disappears at the beer tent.

For a show like MØ’s, ambiance is key. She has a pre-recorded video that plays in the background and the lighting intensifies with the music for complete audio-visual integration. What you experience in the audience is exactly what the artist wants you to feel, unmitigated by the weather or the mid-afternoon sun shining directly into your eye. Drinks are cheap and the line is short too, even though the show sold out.

MØ ends her encore with a cover of the Spice Girl’s “Say You’ll be There” that has nearly every twenty-something lady in the audience mouthing along. After the show as people file out of the club there are a lot of smiling faces and conversations starting with, “that was SO good!” For under twenty bucks MØ and Lincoln Hall give a first-class show-going experience that may have altered a few people’s whole week for the better -and there is still time to get stuff done before the show and drinks after. Compare that to spending a whole day and a whole paycheck in a park, sweating and enduring a band that sucks so you can be near the stage for the good band. MØ’s powerful performance proves that the club is king, and will be long after the festivals move on.