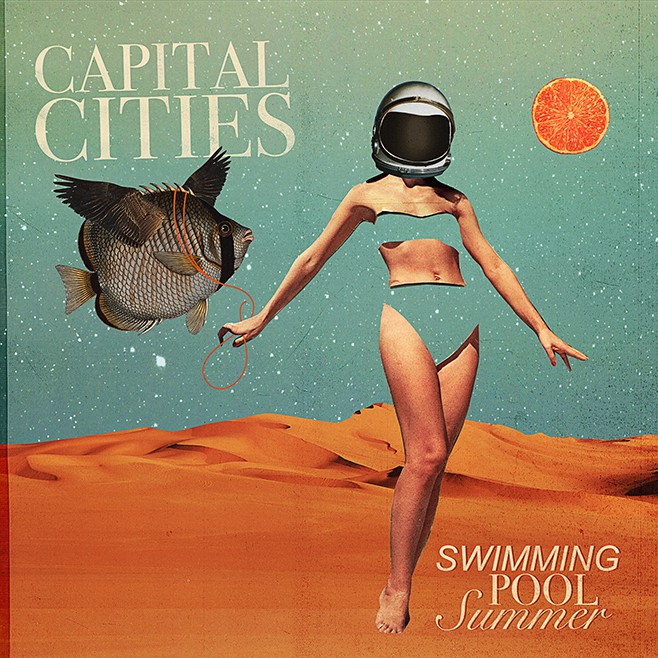 Capital Cities fans should be happy to hear from the duo comprising the group, Sebu Simonian and Ryan Merchant, as the last time we heard from them was back in 2013 with A Tidal Wave of Mystery. There may be a little bit of disappointment in that Swimming Pool Summer is only a four-song EP (five if you count the remix), as opposed to a brand new second album. I don’t think fans should be too sad, though, as this EP has a lot of Capital Cities’ old style (at least the opening track) and some catchy summer tunes.

“Swimming Pool Summer” starts off this EP – it is repetitive in nature, but in the best possible way. With the harmonized vocals and a wide array of synth, trumpet, and string instruments bringing many different levels to the mix, this is easily the best track on the album.

“Drop everything” is the second song on this album and amidst the other three songs, it’s less memorable and lacks the summer sultriness that “Swimming Pool Summer” possesses. “Drop everything” has a bit more of a house music vibe and couldn’t hold its own in comparison to a catchy summer track that it followed.

“Girl Friday” is a little off from the duo’s normal style, as not only does this song feature the rapper Rick Ross (unlike their first album that featured a sublimely better artist in Andre 3000), but it is confused by a chill vibe, poppy repetitiveness and an awkward rap by Ross – who is normally a lot smoother in nature. Merchant and Simonian repeat ‘She’s my Girl Friday’ over and over in the chorus until it becomes obnoxious.

“Drifting” is actually my favorite track on the EP. It veers away from the other styles of the album and feels a little more electronic, but somehow more complex and musical. It brings the EP to “a drifting close” in a manner that is not only fitting of the album, but in a literal way – it fades you out properly.

I am excited to see what this duo comes up with next. Until then, enjoy these tracks at the beach, during the dog days of summer.