Afropunk 2014 was about the sultry summer heat, whether it was the polka dotted, deep throated call of Alice Smith or the classic styling of Lianne La Havas. There’s no question that New York City was hot, humid and heavy this summer and that Afropunk was the one music festival dedicated to providing the most cohesive theme amongst its performers.

Every year this festival holds a special place in Brooklyn. Every year the crowds come out to see progressive music and culture, dine on local eats, engage in political discussions with booth organizers, and catch their favorite band reuniting.

D’Angelo brought it back for the tenth anniversary of this festival. It’s been years since he graced the stage and finished his shows with topless renditions of his hits, but his headlining act was the perfect balance of R&B fresh breath while paying homage by covering Prince’s “She’s Always In My Hair.” D’Angelo set the tone. The night was going to be rocking and the crowd was given an excuse to sweat – aside from the cloistering heat. With the bandleader Questlove backing him on drums, D’Angelo was passionate and on point. The gospel and R&B combination filled Commodore Barry Park with fists pumping in the air, and heads nodding in agreement. D’Angelo reminded everyone that he has the voice to be our contemporary Marvin Gaye and the backing band to show us that the Jimi Hendrix style is still ever present. 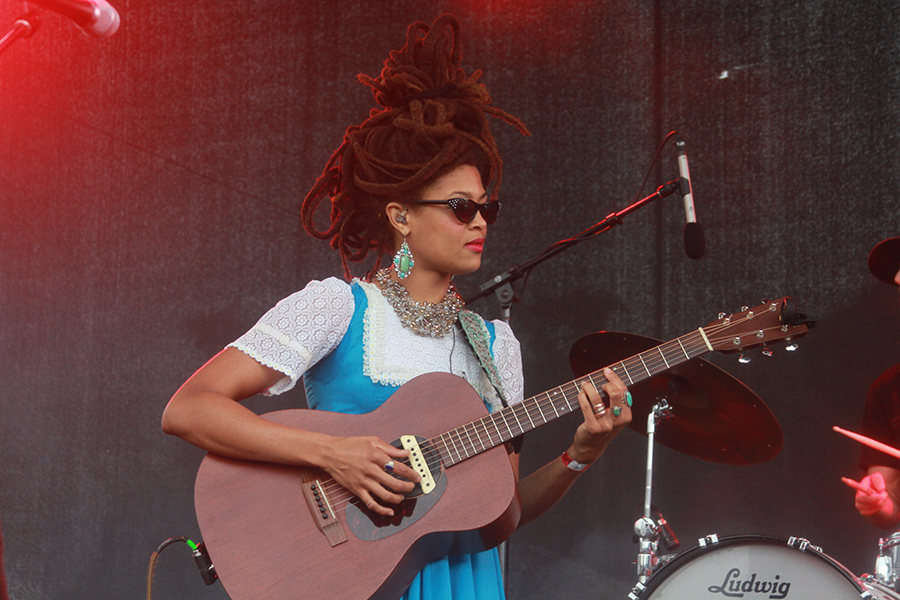 Last year a trio of teenage boys brought their death metal to the stage and then later turned that energy into a million dollar contract. This year it was more about the women who rocked the stage. Valerie June captured her southern sound in the park while her hands danced quickly across her acoustic guitar. TECLA rocked the keyboard guitar and took the time to take her shoes off. Her music relied heavily on electronic distortion and feedback to make a grooving electronic dance tune. One song, titled “Tragic Mulatto,” lends a tone to the music, a sense of a dreadful ending.

The two day festival had a little bit of everything and buried underneath the focus on music is a distinct look at culture and race. The music acts engage in the fun discussion while the booths and fashion inform the rest of the experience. Here’s to 10 years of Afropunk.