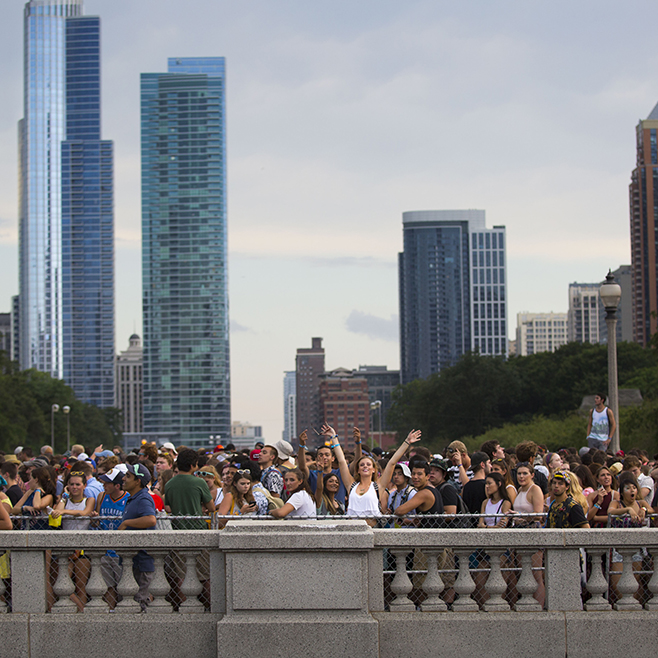 Lollapalooza is a commercial Hellscape of sorts – but not an oppressive one. There’s an ad everywhere you look in Grant Park, even the water hose is branded as a “Camelback refilling station.” It’s a tricky relationship art has with advertising, and one we all accept as a necessary part of life; the head of every coin needs a tail. However, a savvy concertgoer won’t begrudge the system. Getting the most out of Lollapalooza is a game of focusing attention. Django Django’s set is rife with distractions, ranging from people playing Frisbee to teenagers smoking drugs to the product reps giving away junk amidst the audience. But Django Django is a rock-steady band with an overpowering ability to fill a space with melody. In their presence one need only keep looking forward and attention is instantly transfixed away from the nonsense and neverminds to where it belongs, on stage with the band.

But what if you don’t know a musician’s work very well? PELL is a newish act on the national level, out of New Orleans. His fan base isn’t huge yet, though his magnetic stage presence lures in passers by like sugar cubes do to wild horses. In such a situation the best thing to do, as an ensnared stranger, to find a true fan, somebody who knows all the words to all the songs, and stick by them. People like that have energy to spare and radiate it outwards. If the fans can’t infect the newcomers with fun, PELL certainly can. His call-and-response style coupled with crowd interaction and dance leadership makes everybody feel included, “Alright y’all, move back and forth like this: left, right, left, right. You got it! Y’all are turnt up”. He ends his set with a surprise appearance by G-Eazy, and they sing in alternation to the crowd’s delight.

From above, certain shows take on the appearance of solar systems in space. Hermitude performs an entirely new, previously unrecorded set, causing the audience to erupt in dances. Following the rule of magnetic personalities and radiating energy stated above, the wildest dancers tend to be circled by other spinning bodies. There are rogues floating without a system, but they eventually get pulled into some group, and others get ejected out. At the stage, the core of the galaxy, signs and debris fly through the air, heads bob and hands fly up. Then, when PELL makes a guest appearance the crowd goes supernova. Though the ambient temperature at Hermitude’s stage is around ninety degrees, it rises to over two-million while bodies melt into a glowing, radioactive dance orb, pulsating to the electro-bop of the Australian duo’s computers.

Please allow a moment’s digression to lament the poor, ignorant parents of the Lollapalooza teen. How unaware they must be. If only they could see the group huddled around a hot bottle of vodka, smuggled in under someone’s armpit. If only they knew what their daughter wasn’t wearing after she got out of the car that dropped her off. If only they knew what their son was saying, or what he did to provoke a fight. Such is the scene at Tyler the Creator. A serious fan would never be deterred by a few vomiting post-pubescents, but the less determined will instead visit Chet Faker. Himself an Australian, the Faker crowd possessed as many accents and languages as a UN coalition. As the lanky, bearded Aussie crooned, the audience swooned. In this environment teenage troubles melt away, and everybody in the vicinity got an automatic upgrade to become twenty-three for the duration of the set.

If Saturday’s headliner, Metallica, could be summed up in one sentence, it would be: “Go home dad, your embarrassing me in front of the metalheads!” The defining feature of that show would be the mosh pits, which ranged from delightful push-parties to flailing orgies of senseless violence. When a man is old enough to have grandkids, he shouldn’t be punching strangers in the back of the head, Metallica show or not. Nonetheless, the stage lasers were cool, and they somehow stretched the five-minute long Master of the Puppets song for a raging half-hour. It would have been a perfect show if they stuck to their pre-Black Album catalogue, but alas, they didn’t. Gimme fuel, gimme fire, gimme that which I desire: a quick death.