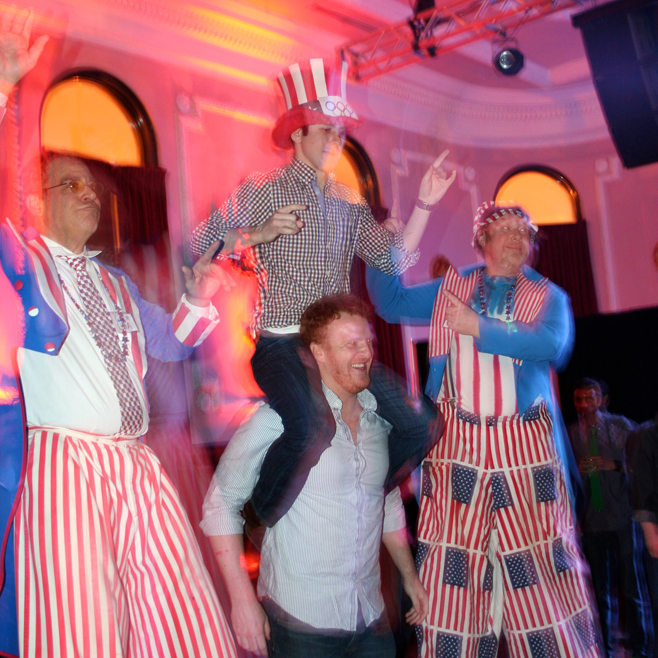 It was a slow build. At 10 pm, Logan Square Auditorium is only at maybe 10 per cent capacity, but all the necessaries of a solidly strange evening are there. The Numbered Days Loft Party, (invented by a Mr. Marc Uible a couple years ago as a way to create excitement during the winter doldrums) promises something more than the typical club night or speakeasy dance party. Things to play with, things to make messes with, photographers, color changing lights, music, reasonably priced drinks – The Numbered Days has that covered.  Chicago’s climate tries its best to pitch in too by adding a dusting of snow and dropping the temperature so people’s breath crystallizes in a picturesque way. Though, perhaps Mother Nature’s contribution has the unintended effect of driving away the less dedicated.

To the fittest of partiers, those who wear stiletto heels for better bite on the ice and whose winter coats are made by Bacardi and Coke, the bit of herd-thinning weather galvanizes their wills. Them that came, though not of quantity, were certainly the party elite, which is in keeping with the theme of the night. “Games”, the official name of this party, is held in honor of the Olympics. All decorations and party paraphernalia are designed to create an atmosphere of sporting camaraderie and support for the US team.  Below is a brief step-by-step for clarification:

Upon ascending the well-worn, pre-war stairs to the marbled floored and oak trimmed auditorium that one man in the bathroom referred to as “grade school status”, the first people you will meet are two women in painting aprons. They have little square whitewashed plaques and tables with paints and brushes on them. They tell you to make your own Olympic image and put it on another table divided by different colored rectangles, one for each color of the Olympic rings. Heading each color is a Twitter hashtag like, “#olympin, #sochieesey, #sochicago”, etc. The plan being that you take a pic of your painting and upload it with the hashtag, but, like, that last part’s a lot of work, not a lot of people did it.

Next you head to the photographers where they’ve set up a mountainous backdrop, bordered on one edge by an American flag. On a table they’ve filled a bowl with prompts, written on pieces of paper. Most of them have the words, “Gnarly Snowboarder” on them.

While you’re painting and picturing, DJ Matt Roan works the music machines. The noise level is appropriate as it allows conversation, but for dancing it could have been louder.  At around 11 the volume is cut and on the balcony is Marc Uible, a few friends and a 4-piece brass band. They play the NBC Olympic theme then parade downstairs where Marc and his friends hand out plastic Olympic torches.

DJ Matt Roan leaves the stage for Autograf, a two-man DJ duo who blend melodic pop artists like Mumford & Sons into dance tracks. By now the floor is beginning to pulsate with the rhythm of the dancing mass on top of it. Things are going great until all of a sudden GIANT MEN ON STILTS RUN INTO THE CROWD AND START PICKING PEOPLE UP! It’s a scene out of War of the Worlds. The men are dressed in Uncle Sam attire and have a level of ease on their stilts that suggests that maybe their legs are actually that long. From the balcony, a cascade of glowing beach balls rolls first through the paint on the tables, then into the crowd. Security puts a stop to the ball fiasco before any Jackson Pollocks are made on the ceiling or walls.

By 1 am the crowd is thinning and the fun is winding down. Outside is the ninetieth consecutive day of snowy winter wonderland, but the warmth from the Games Loft Party will stave off frostbite for a little while at least. As The Numbered Days events scale up, we can expect ever more insanity next year and beyond.