On August 10th Electric Island (EI) will once again take over a portion of Woodbine park near 1695 Queen Street East. With so much happening in Toronto this summer our typical EI long weekends are a bit of queue but given the circumstances it’s a good thing (Caribana and Veld were both last weekend).

For the second last hurrah this summer Electric Island curated another spectacular line up of performances who will all get you dancing, sweating, and likely feeling a little parched.

The early shows on the Main Stage will begin with Toronto’s own Andy Cue, with his deeper tech-house, and Butrous (Peter Naayem), with drum inspired rhythms. Chicago’s Lee Foss will also join and it is not his first rodeo at EI so we can all expect a tailored T-Dot set. Taking us into the evening will be Guti. A jazz artist and pianist turned house music producer who will share his newest live set. Up next are Dusky, a UK production ensemble that consists of Nick Harriman and Alfie Granger-Howell. To quote Pitchfork Dusky duo create “anthemic dancefloor fantasies.” To close out the night Daley Padley, aka Hot Since 82, a British DJ and house music producer, will take the stage. Daley has been steaming up dance-floors since 2012 under the above moniker but his DJ career as such begun at the age of 14 in the darkest of neighbourhood nightclubs.

On the other side of the park, where things are a bit more intimate at the Moog Stage, the day will start with Jackie Spade and Berlin’s Sean Roman. Roman is internationally recognized for his Drum ‘n’ Bass productions but is moving into the house and techno scene. Later on house and techno DJ  Nitin, with roots in Detroit, will also join in on the Moog Stage party. DJing is the thing he feels most passionate about and some even attribute the “explosion of Toronto dance music artists on the world stage” to Nitin – high expectations for this one are in order.

Lastly, Domino’s prized artist George Fitzgerald will close out the small stage with a DJ set. George’s music on record is quite melodic and melancholic, as can be heard on All That Must Be, for example, but his live sets is where he truly finds himself as a DJ churning up one dance track after another.

For tickets head over to electricisland.to and for planning here’s a handy little Spotify playlist, just hit shuffle and enjoy. 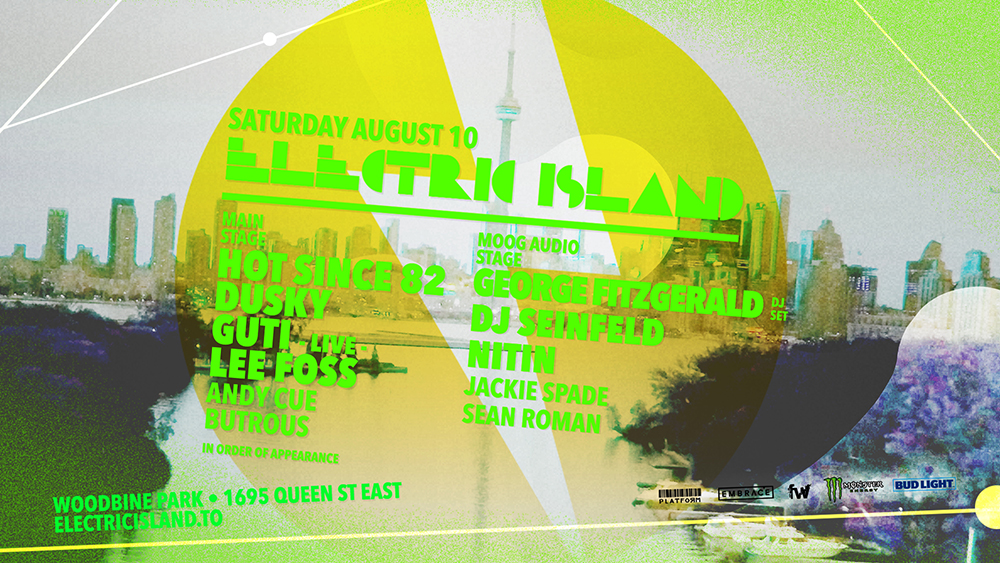