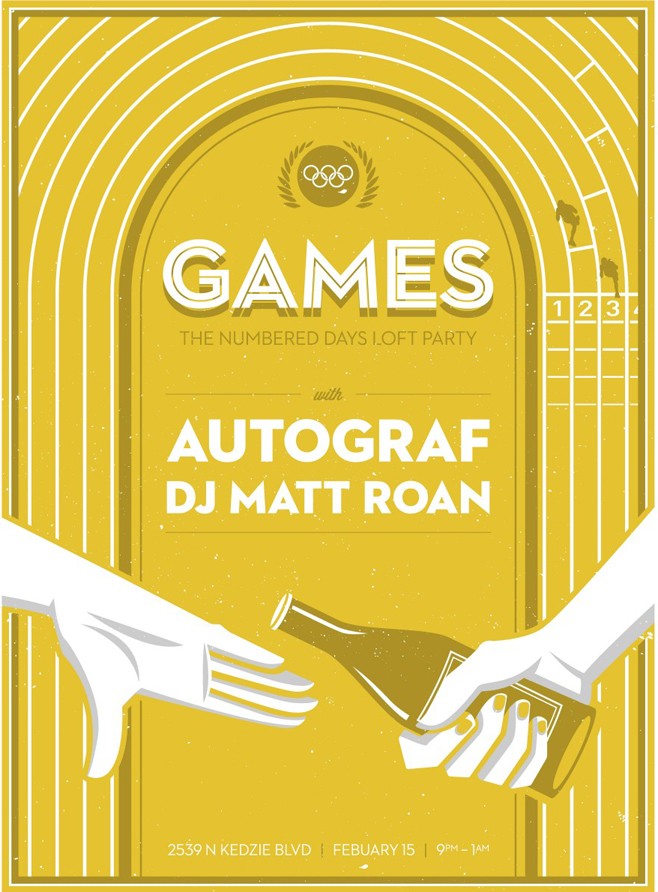 Now in its third year, The Numbered Days parties have gone from curious gatherings, set up by Marc Uible with his friend Brian Marks and their buddies, into huge events drawing 700 people or more. Games, themed after the upcoming Olympic Games, will happen at the Logan Square Auditorium, just off the Blue Line Logan Square stop, at 9pm on the Saturday after Valentine’s day.

One of the core concepts behind all of The Numbered Days events is the idea of collective effervescence; the concept that when people congregate it brings out a mass mentality unique to the group that might be outside the everyday thought processes and actions of the individual group member. In Games: The Numbered Days Loft Party, the event creator Marc Uible and his merry band of artists, performers and musicians are seeking to create an experience where people can get together, touch, move, explore and meet in the ways that we do through shared experience platforms on the internet, only in real life. As Marc puts it, the goal is a triangle of party, art and music that people can participate in, a way to break off from the normal club and bar scene where you generally know what to expect.

What can somebody rolling in off the icy street expect at Games? Marc didn’t want to give away too much, but at the very least there will be a brass band playing while people pass Olympic torches, stilt walkers, sound activated LED beach balls and a collaborative Olympic Village mural everybody can help make. DJ Matt Roan and Autograf will spin the audio discus and keep the energy high. “Ultimately it’s a dance party” says Marc, “So we aim for that…we want to show emerging artists and musicians. People testing the limits of their craft. We want to bring people in who have some buzz around them for doing new things.”

As for marketing and ways to learn more about The Numbered Days, the only concrete method is to keep the ol’ ear to the hard-packed snow and ask around. “I don’t know exactly how our marketing works” says Marc, “It’s all word of mouth through friends. People just show up.” The Numbered Days works off the snowball effect of guerilla marketing; if they only have a budget of ten thousand, they’d rather put it all into making an awesome party than split any of it up for advertising. If they do a good job, people will talk and the next event will be bigger.  Though Marc used to do his own flyers, he did invest in a professional, Zack Anderson, for this event. The end goal some years down the line is a big inclusive festival of art and music, like Lollapalooza meets Burning Man, but for now the focus is making a few really popping parties throughout Chicago.

Marc is always on the hunt for new talent. For people wanting to get some exposure and make a little money too, hit him up at marc[at]thenumbereddays.com