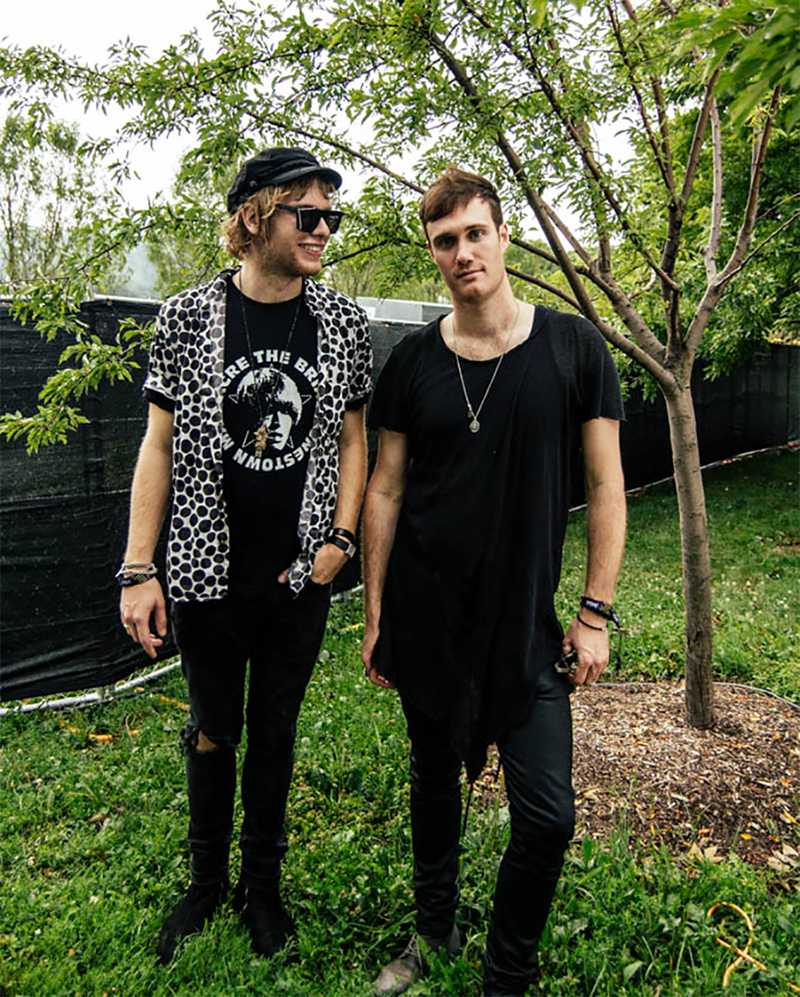 It’s hot, humid, a thunderstorm has just passed (with another on the way), and Lollapalooza’s media lounge is buzzing with artists, writers, photographers, videographers, PR teams, Lollapalooza staff, etc. Amidst the slight chaos, I quickly locate Bob Moses (Jimmy Valence and Tom Howie), an hour removed from their first performance, casually chatting with a photographer. While they’ve only known each other for a few years, the duo behind the popular single, “Tearing Me Up,” have a musical chemistry that is immeasurable. With a music career that is sure to advance and a fan base that is growing at lightning speed, the duo has remained humble, committed to their craft, and witty. We were able to catch up with the duo in between sets at the 25th anniversary of Lollapalooza.

Jade Newton: You have been touring extensively over the past three years; even touring while simultaneously recording your full-length, debut album, Days Gone By. Now, here you are, performing at one of the biggest music festivals in the world. Tell me what’s going through your mind. How are you feeling right now?

Bob Moses: It’s great; we’ve always heard great things about Lollapalooza and [we’ve always] wanted to play it. It’s awesome to get to do it finally. It was a great turnout, tons of people came, even in the rain, so there was a very good vibe from the get-go.

JN: You’re both from Vancouver, but didn’t know each other until you both moved to New York. Was there an instant musical chemistry and friendship between the two of you?

BM: Yea, totally! The first studio session was like ‘Wow! This is awesome, we have to do this all the time.’ So, from the beginning, it was like missing puzzle pieces coming together.

JN: There are a lot of different genres at play in your music, so what made you decide on your sound?

BM: It’s part conscious and part not. We were running in this scene with this sound from people that we were collaborating with and we just started trying [different] stuff and you just go with what feels right. The goal was to be a cool electronica band that wrote songs, had vocals, told stories in our songs and also had really cool production. We were making sure that we covered certain bases, like playing a lot with the sub frequencies and the bass, for example, in our production. So, we kind of had these guidelines [of what we wanted to do], but then you have these tools, and how you arrange and use them…that’s being an artist. It’s your own voice coming through [your art]. With our music, you can hear all of the influences because that’s naturally what comes out. With our lyrics, we try to get some serious shit in there, but [at the same time] keep it uplifting; that’s the thing we’ve always tried to do.

JN: With so much music available, what do you attribute to your success as standout artists?

BM: I think we kind of got inspired by a sound that was coming out of NY; a very specific niche little scene and we were inspired by the grooves of that. We were trying to write songs that fit over the top of those grooves; songs that fit where we were and what was happening at the time. The tracks that we do are very specific and unique with the layered vocals, and of course guitars, along with and instruments layered over other instruments. And we’ve have stuck this sound over the years.

JN: What is coming up for Bob Moses? Are you going to jump right into your next album after you wrap this tour or will there be some downtime?

BM: We are already starting to have plans for when we’re going to make the next record and next year is when we’ll get to dive in it. We’re going to finish touring until the end of this year and I think we’ll always be on the road a bit. Not necessarily in a tour bus, but we’ll do gigs; we get a bit restless and our music was born out of a live thing. We come up with ideas, we’ll do a gig, put the ideas in, and we’ll play it. The live arena influences what we do in the studio, so we’ll dive into the new album next year.