Celebrating Paper Bag Records’ 100th release, the #PAPER100 party at Lee’s Palace showcased a range of the record company’s talented roster, including Ottawa’s The Acorn. Second to the stage, the indie-folksters, fronted by Rolf Klausener, cast an immediate ease that seemed to reflect the event’s overall theme of friends coming together to celebrate the power of good music. Joined by members of the Rural Alberta Advantage and Cuff the Duke, the performance highlighted home grown Canadian artists jamming together in one of Toronto’s most reputed arts festivals.

Bride & Groom, a folk-infused Montreal duo transformed The Painted Lady’s small stage into the setting of a legitimate hoedown during their NXNE set. Real life couple Jesse Daniel Smith and Kaitlyn Raitz are sweet as cornbread biscuits, combining their guitar/percussion/cello skills and vocals into a series of folk ballads that hearken back to the coffeehouses of ’60s Greenwich Village. Regaling the crowd with anecdotes about the origins of their music, these two shone brightest with songs “On The Run” and “The Drink,” both off of their debut album released only a week before the show. Keeping impressive time with the kick drum, Smith strummed along to Raitz’s busy bow to create intelligent, heartfelt songs.

Another Montreal native, FOXTROTT was getting ready for her set at the Adelaide Hall. Joined by her usual french horn player and a drummer, FOXTROTT performed a chill, synth-heavy set to an intimate group of fans.

Sneaky Dee’s opened their door to the NXNE regulars – Grounders. You could almost see the acid washed haze emanating from the stage during Grounders’ easy, breezy Thursday night set. Still riding the surf of their recently released self-titled album, the Toronto-based band showcased their trademark new wave sound to an attentive crowd that filled the upstairs of Sneaky Dee’s. Offering snippets of humorous banter, front man Andrew Davis led the band through a selection of colorful, fluid songs that registered in multiple sonic layers, despite being initially hindered by a malfunctioning sound system. Bottom line? I’d love to see these guys play a show while floating down a lazy river.

As we got to the Berkeley Church for the Pitchfork showcase featuring Tink it became clear why venues around the city have not been filling up – it seemed like everyone who wasn’t in the Church was waiting outside with the hopes to get in. Tink knows how to work the crowd, especially one filled with enthusiastic fans. Not surprisingly reminiscent to Azealia Banks, Tink was hopping around the stage dancing with the audience, people were getting real on the dance floor taking off layers of clothes and rolling up tank tops. 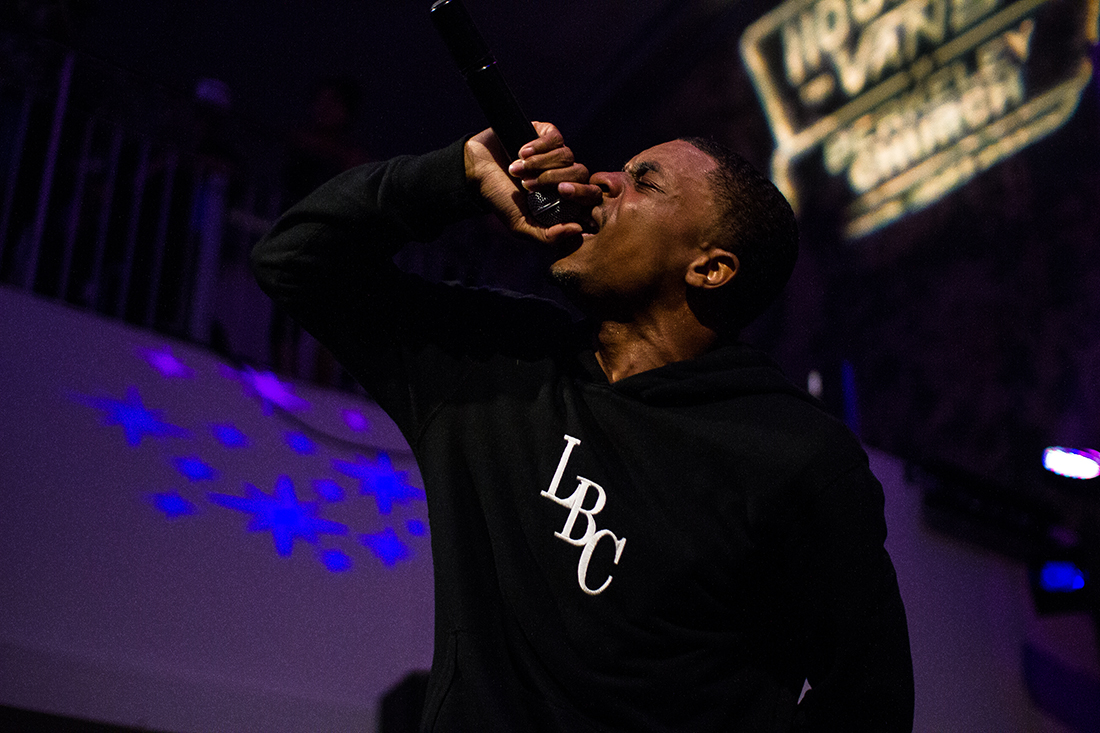 Following Tink, Vans stage was taken over by Vince Staples, a rapper from Long Beach, California. Harder on his rhymes and darker with his lyrics Staples is gangsta rap not hiding any reality under upbeat catchy music. Staples is one of those new rappers everyone should pay attention to, this kid is going places.

Shortly after San Fermin’s upbeat eight-peace ensemble performance, Lucius took the stage all in white to play a highly anticipated show for a full Adelaide Hall. The vocals were in perfect sync between Jess Wolfe and Holly Laessig who facing each other for the entire set were working of off each other’s energy.

More photos can be found here.