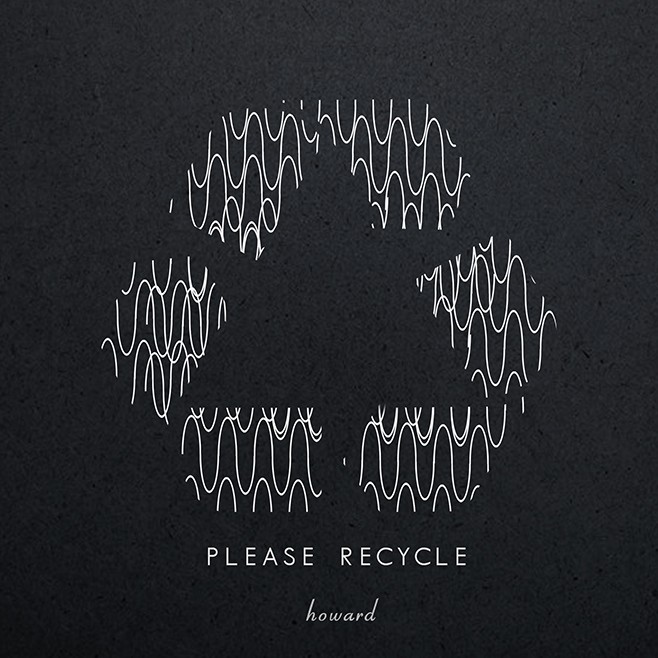 Over twelve minutes and fifty-nine seconds, the entire run-time of the Please Recycle EP, the Howard gang from Brooklyn take the listener on a musical escapade, blending robot noises, nonsense voices, electric guitars, and other mystery instruments to make a mini concept album of rare scope and quality. Howard succeeds at defying the rules of music, their songs are short and weird, with lots of tone shifts, no real defined central beat or timing, and the noise is constant. And yet – it’s a great little album! All five songs work together to play with the listener’s expectations, to create an atmosphere of surprise and excitement. It’s an EP that can conduce smiles to over and over with each repeated listen.

Please Recycle is organized around the four major recyclable elements: Plastic, Glass, Paper, and Metal – with a fifth song for Waste. The significance of the album title is symbolic: Howard used the individual sounds and layers from their previous LP, Religion, then re-mixed them and added new elements. They recycled their old songs to make something interesting and fresh that the music world needs.

The idea of reusing old beats has been done in folk, hip-hop, and even classical music, but Please Recycle is distinct because each song sounds so processed. Like the base material went through a machine so many times the only thing it shares with the music of the past are the atoms that composed both incarnations. Like an aluminum soda can becoming part of an airplane wing. The final song, “Waste” is an outlier. Where the others have a vague sense of rhythm, “Waste” embodies the act of something not working out. It’s discursive and troubling, almost as if the composer tried to get it to work, but ended up ruining it in the process. However, in its failure “Waste” might be the most interesting song on the album. It makes no pretense to being a song at all, and if it had a voice it would probably say, “…kill me…” It’s a track of sounds that are trying to become something, and through comparing that angry struggle to the polished melodies of the other four tracks the listener gets a sense of the musicians’ process.

The lyrical guidance on this album is composed of elves speaking a non-language in high pitches and whispers, with the exception of one clear phrase on the “Metal” track: “we’re all gonna die…” What’s great about this is that in keeping with the theme of recycling, the voices sound recognizable, but too different to determine the exact original source. The analog and digital instruments work the same way, sometimes it’s impossible to tell what’s a computer beat and what’s guitar feedback, but it also doesn’t matter. Trust the chef’s instincts: the vanilla will go well with the tumeric once they add the basil!

This is off subject, but an alternate title for Please Recycle could be Life in a Pinball Machine. It’s a busy album, with lots of things all beeping and booping at once. This gives the EP a sense of urgency and action, but the moments when the beat slows, and the background fades away, become all the more significant. Like walking through a busy city, into a loud elevator, that ejects into a serene little park that no one knows about. It’s nice and just brief enough to keep from being boring.

Extrapolating, that might be the alternate title to this review: Nice, Brief, and not Boring: Howard’s Please Recycle. It’s good, and it’s available now. Buy it.