Twas the night before Halloween and despite the unpredictable Chicago weather, the annual Freaky Deaky music festival scared up few tricks, but also had an abundance of treats in the form of hip-hop, EDM, and electro-pop. Clad in their best Halloween costumes, festivalgoers spent Halloween weekend with the likes of 2 Chainz, Pretty Lights, Key N Krates, and Porn and Chicken. Since its inception seven years ago, Freaky Deaky has traditionally taken place within the confines of an indoor music venue; this year, the festival was expanded to three days and took place outdoors, at Toyota Park, home of the Chicago Fire soccer team.

One of the many things that make Freaky Deaky aberrant from other music festivals is the timing; while most festivals take place during the summer months, Freaky Deaky takes place Halloween weekend. Because Freaky Deaky is a scaled-down version of larger outdoor festivals, it allows for a more intimate experience between the festivalgoers and performers, as well as longer performance sets. Each stage and spectator viewing area were under a massive tent, with the exception of The Crypt stage, which was designed to make one feel as if they are inside an underground tomb.

Between the festival’s Halloween horror theme, the temperamental weather, and the costumes (of both attendees and performers), Freaky Deaky was not just a music festival – it was an adventure. Here are some of the more notable performances from Freaky Deaky 2015. 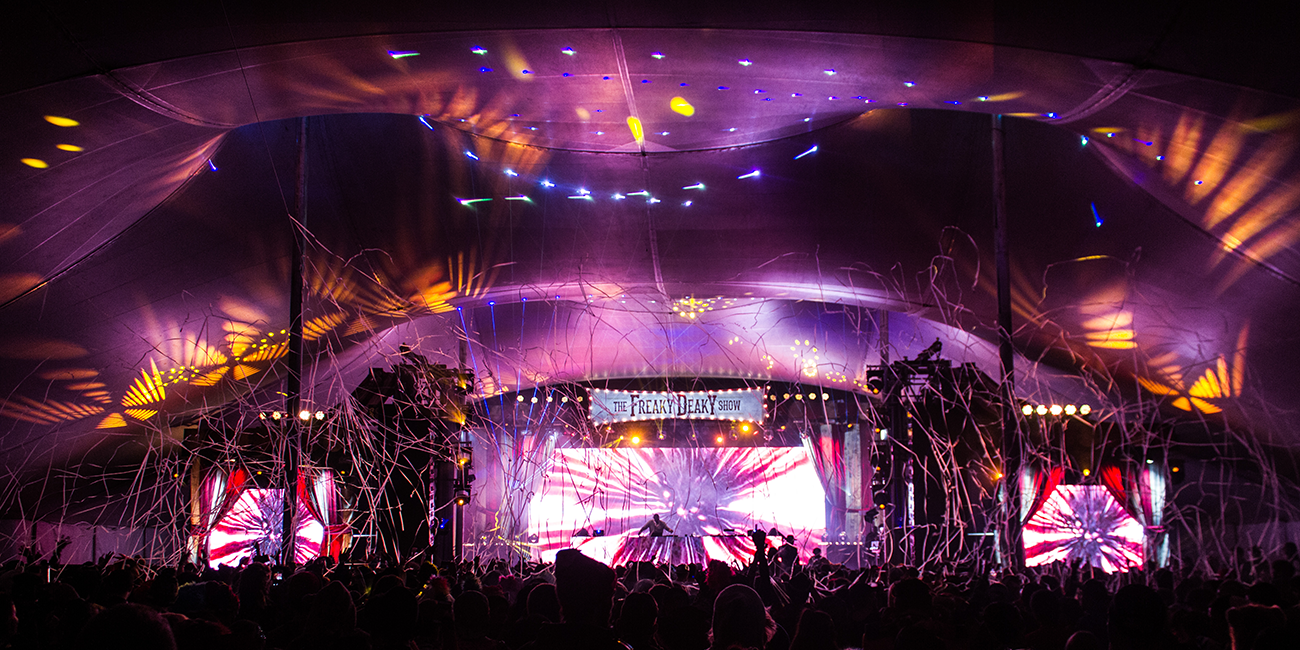 Joey Bada$$ Riding the success of his mixtapes, 1999 and Summer Knights, Joey Bada$$ released his debut album, B4.Da.$$, earlier this year and has been touring non-stop since. On a cold and rainy Halloween night, restless fans chanted “Joey, Joey,” until the Brooklyn-born MC finally took the stage, fifteen minutes after his scheduled start time. Despite some minute technical problems at the start of his set, the Joey Bada$$ didn’t miss a beat. Accompanied by DJ Statik Selektah, he opened his set with the standout track, “Paper Trail$” followed by the gritty “Big Dusty.” Wanting to remind fans as to why they love his music, Joey Bada$$ took an enthusiastic trip down memory lane that included a medley of music from his critically-acclaimed mixtapes (including “95 Til Infinity,” “World Domination,” “Hardknock,” and “FromdaTomb$”). He continued the nostalgia by performing “Waves,” from his 1999 mixtape, in its entirety, as well as his feature on Kendrick Lamar’s  “1 Train.”

The second half of Joey’s set featured music from B4.Da.$$, including, “Hazeus View,” “No. 99,” “Christ Conscious,” as well as new music (“Lose Control” a collaboration with Glass Animals). Joey Bada$$ handpicked eager female fans from the audience to join him onstage while he performed a snippet of the upbeat track “Teach Me.” Winding down his set, Joey paid tribute to his mom with the endearing “Curry Chicken,” followed by the penultimate song, “Survival Tactics.” Many artists choose to close out their show with their biggest hit, however, Joey Bada$$ closed his set with “My Young N*ggaz,” an unreleased track originally penned for his B4.Da.$$ album.

While Joey’s set included a copacetic balance of his older and newer music, it also reminded true hip-hop heads of what the genre used to be and gave new fans a further appreciation. His music and lyrical style creates a longing for the hip-hop days of old.

AlunaGeorge: British-based synthpop band, AlunaGeorge took the stage clad in their Halloween best and opened their set with a vocally flat version of “Attracting Flies” and “Supernatural.” Fortunately, the vocal aspect of the performance improved as the set progressed and much to the pleasure of the fans, the band sang each song in its entirety. With the help of festivalgoers, the band floated through their popular collaboration with Disclosure, “White Noise,” followed by the soothing, mid-tempo, “Best Be Believing” and “Kaleidoscope Love.” Alluding to the next track, Aluna Francis, the band’s front woman, told fans, “I think you’re going to know the next track, if you don’t I don’t know where you’ve had your head,” prompting one of the most unique covers of Montell Jordan’s “This Is How We Do It.”

When Francis wasn’t dancing mildly seductively with each song, she kept the fans engaged with witty banter in between. While the band performed a number of songs from their Body Music album, they also entertained with covers of Jack Ü’s (Skrillex and Diplo) “To Ü” and Baauer’s “One Touch” with Francis not only crooning but toying around on a synthesizer.

With a little less than an hour to perform, the set flowed effortlessly and the band made the most of their 50-minute set – packing in as much music as possible, while still leaving the fans wanting more. AlunaGeorge was fun to watch and a welcomed alternative to the high-energy EDM and hip-hop that ruled the weekend’s festival. 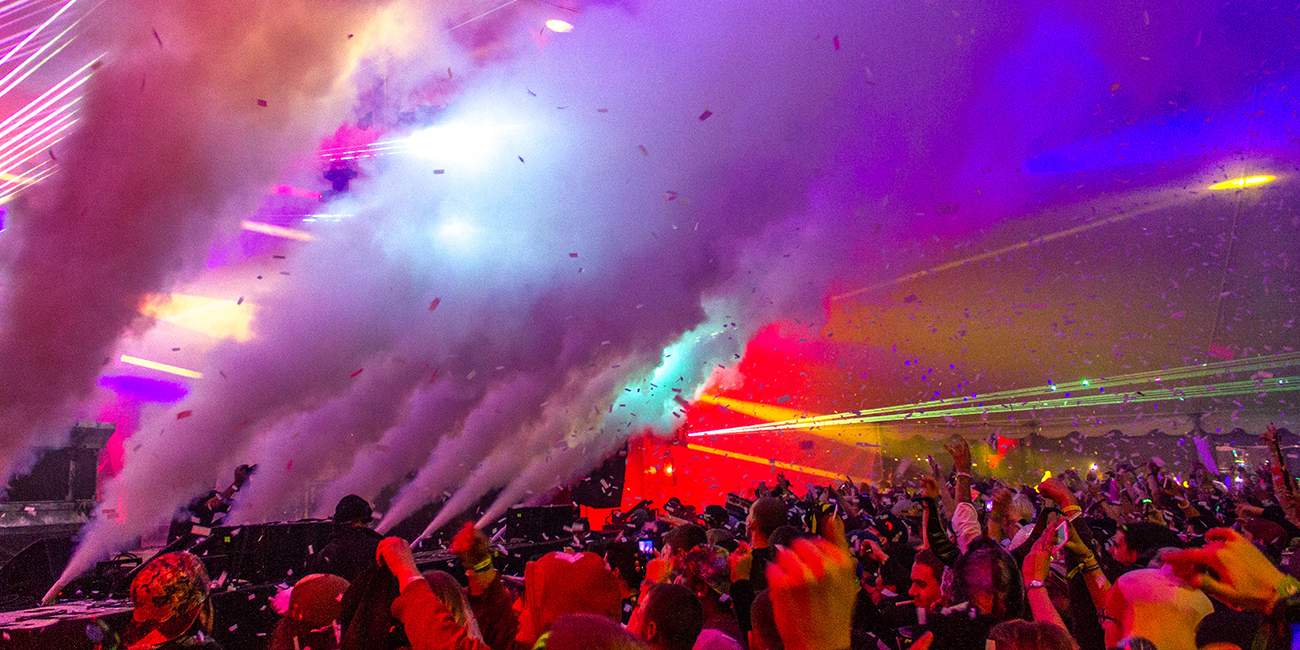 Emancipator Ensemble: Emancipator (Douglas Appling) has been making music for nearly ten years and in that time he has made a conscious effort to produce a sound that is distinguishable from other artists of the electronic/trip-hop genre. As the sun began to set, Appling and his four-piece band (collectively known as Emancipator Ensemble) gave fans a hypnotic musical experience. Known for incorporating a mesmerizing light show into their performances, the band performed old favorites like “Wolf Drawn,” “Elephant Survival,” and “When I Go” as well as new music from their Seven Seas album, including the album’s title track, and the Molly Parti feature, “Land & Sea.” Appling has a knack for incorporating classic hip-hop songs into his shows, and for the Freaky Deaky crowd, it was a trip-hop version of Busta Rhymes’ “Put Your Hands Where My Eyes Could See.”

Ilya Goldberg, the band’s violinist, is comparable to icing on a cake or unwrapping a much-anticipated Christmas gift. His live violin solo increased the overwhelming enthusiasm that swept through the already enraptured crowd, which continued to swell as the set advanced.  As a solo artist, Appling bled with talent and creativity, and since adding Goldberg, as well as a drummer and a bassist to his live shows, Emancipator is reaching new heights with his music. The Emancipator Ensemble executed a flawless show as one of the highlights of Freaky Deaky 2015.

Vic Mensa: Despite starting his set twenty minutes late (due to reasons unknown), Chicago’s own Vic Mensa (along with his band) tore down the house with the little time that they had to perform, while donning peculiar, yet creative Halloween costumes. Backed by a DJ-guitar player and a bassist-keyboardist, Mensa took the stage on the final night of Freaky Deaky to a very eager crowd overflowing with loyal fans. Mensa fed off the overwhelming energy of the vast crowd and vice versa. Mensa kept the crowd dancing, jumping, and rapping along with him, through his entire set. Mensa glided through tracks from his 2013 INNANETAPE mixtape such as, “Feel That,” and “Holy Holy” before performing some of his more recent music, including the Skrillex-produced “No Chill.” Mensa momentarily slowed things down with a cover of Chance The Rapper’s mid-tempo “Cocoa Butter Kisses,” before performing the audibly powerful “Vertical” (a new song from his upcoming album Traffic).

Closing out his set, Mensa performed a cover of Nirvana’s “Smells Like Teen Spirit” to a crowd that was already overflowing with energy and excitement. His cover of “Smells Like Teen Spirit” took the enthusiasm to a new level, which gave way to a mesmerizing performance of the ever-popular, Kanye-produced “U Mad,” which came complete with Patron-pouring, water-throwing, and crowd surfing. Coupled with his talent, the energy that Mensa brought to his show was more than satisfying for the sizable crowd that had the opportunity to experience this musical journey. 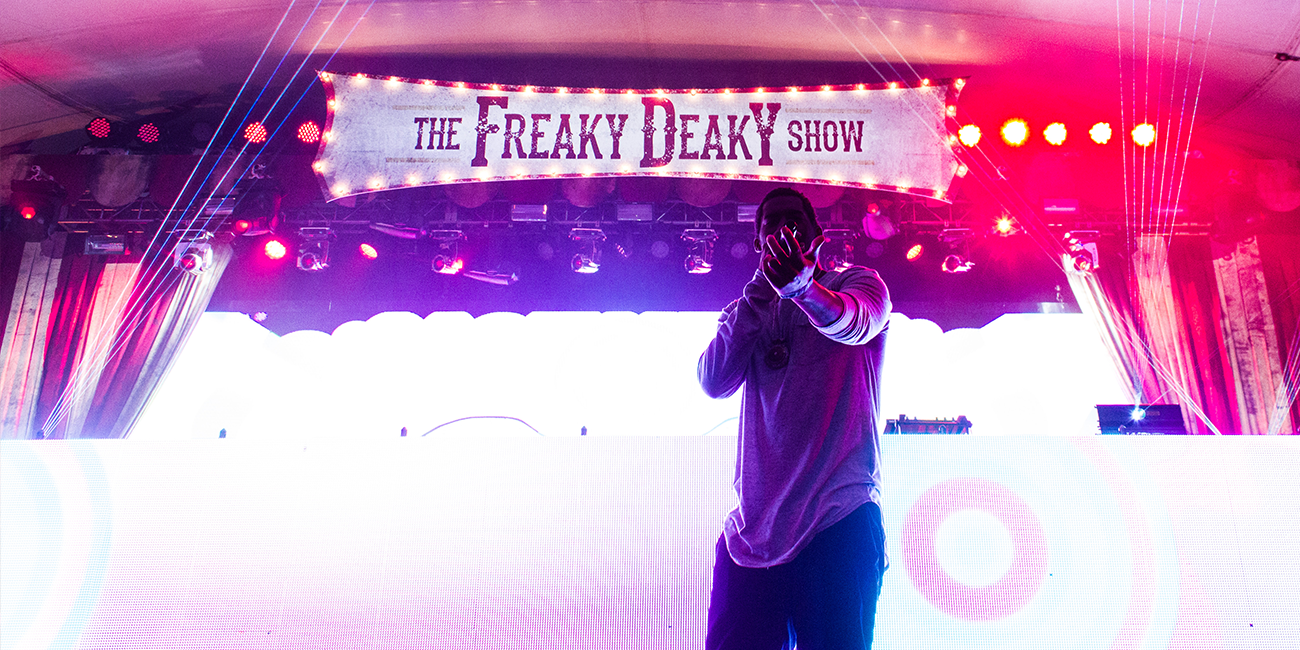 Having just gotten married a week earlier, and fighting a fever, Logic (née Sir Robert Bryson Hall II) gave all he had and more and his fans reciprocated. Reiterating the fact that he is about “peace, love, and positivity,” the 25-year-old performed most of his earlier music while promoting his upcoming studio album, The Incredible True Story.

GoldLink (née D’Anthony Carlos) not only impressed with his lyrical skills, but his turntable skills as well. The first half of his set consisted of music from his The God Complex mixtape, while the second half of his set saw him perform several hip-hop covers and spin for the final ten minutes.

Both are emerging from the underground hip-hop scene with lyrical styles and content reminiscent of some of the greatest talents in the industry. Hopefully, both will stay true to their styles as they continue to build their success.