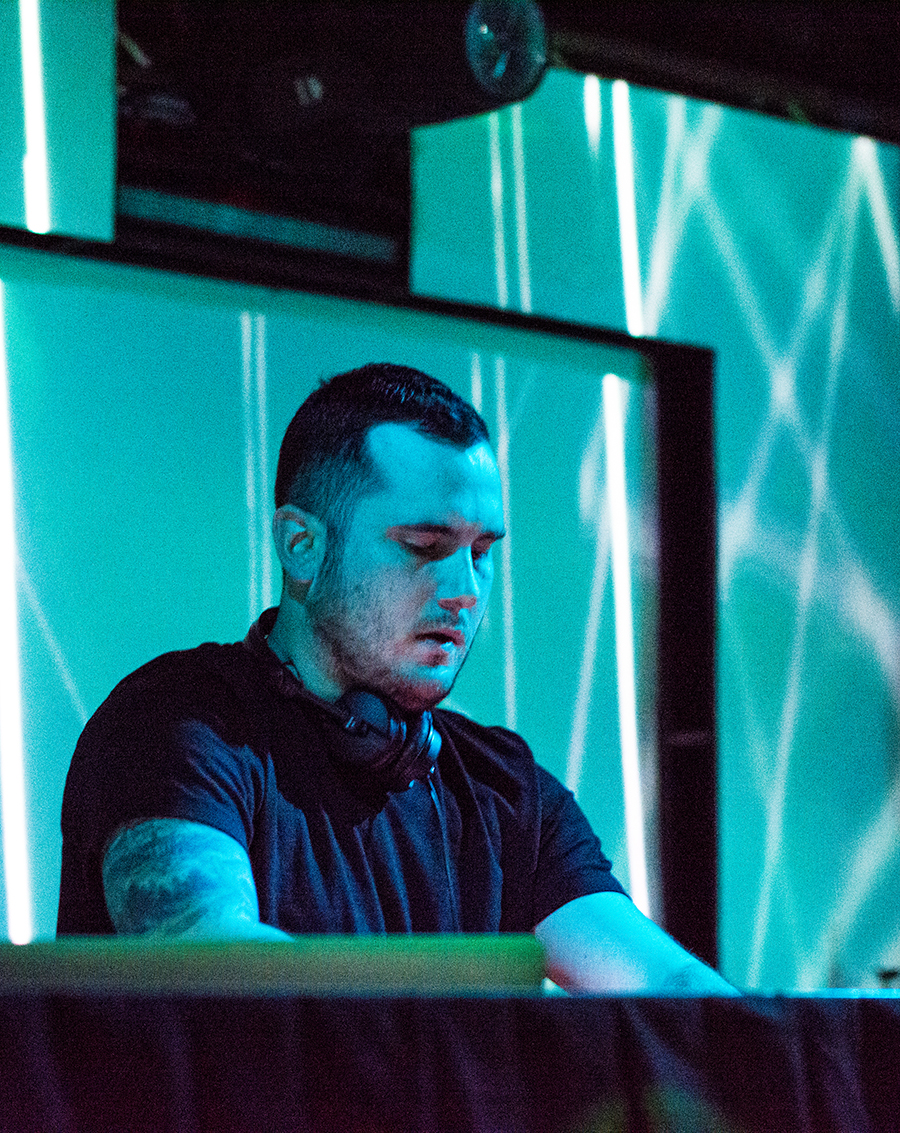 There’s a vibrant electronic music scene in Portland, large enough and broad enough in scope to merit release across multiple local labels. This scene produced and/or nurtured talents as diverse as Natasha Kmeto, Litanic Mask, Vice Device, ASSS, Philip Grass, Soft Metals… suffice to say that if you’re into synth, dark wave, techno, what have you, you’ll find it here. At risk of generalizing, that scene largely takes place on the east side of the city in venues like Holocene, Beacon Sound, and other bars and clubs. It wasn’t until Andrew Bayer came to town that the other techno scene in Portland revealed itself, and the differences couldn’t be more pronounced.

Whiskey Bar is located in the Old Town neighborhood of Portland, right at the west foot of the Burnside Bridge. Friday and Saturday nights the city closes a few of the streets to vehicle traffic, transforming five or six blocks of Couch St. into a kind of party zone. Large nondescript buildings that look like warehouses by day reveal themselves to be nightclubs and crowds appear as if by magic to line up in front, complete with velvet ropes and door guys guarding entry. The dresses are small, the heels are high, and there’s a palpable haze of Axe body spray hanging in the air. That’s not sarcasm. Walking in front of one club, a young woman audibly retched as she passed the doorway and an instant later it became clear why: an invisible cloud of Drakkar Noir cologne lingered there, assaulting passersby.

To the uninitiated, Whiskey Bar seemed a peculiar club for Andrew Bayer to play. Why not book Holocene, or one of the many other nightclubs that host live shows? Once you see Whiskey Bar’s interior, however, it makes all the sense in the world. The venue retains to brick archways and exposed steel of the building, whatever its original use, and feels more like a New York nightclub than any other place in town. It’s long and deep and cavernous and on this night packed full of people who know Bayer’s music and want to bask in the green-blue glow of the lights as they pulsate to the beat. Not dance, mind you—there’s no room for that. The audience, pressed chest to back, side to side, pogos and undulates and waves their hands in response to Bayer’s beats and gestures. The place is packed and at a premium price: $25 a head, plus $5 re-entry stamp, and god knows how much for drinks. In a larger city those prices are normal but in Portland, $25 for a ticket is sky-high, reserved for the major touring acts playing the Schnitzler Hall or Moda Center. A regular show at a PDX club is $8 or so, $12 if there are 3 artists and that’s sometimes pushing it. This was an eye-opener. 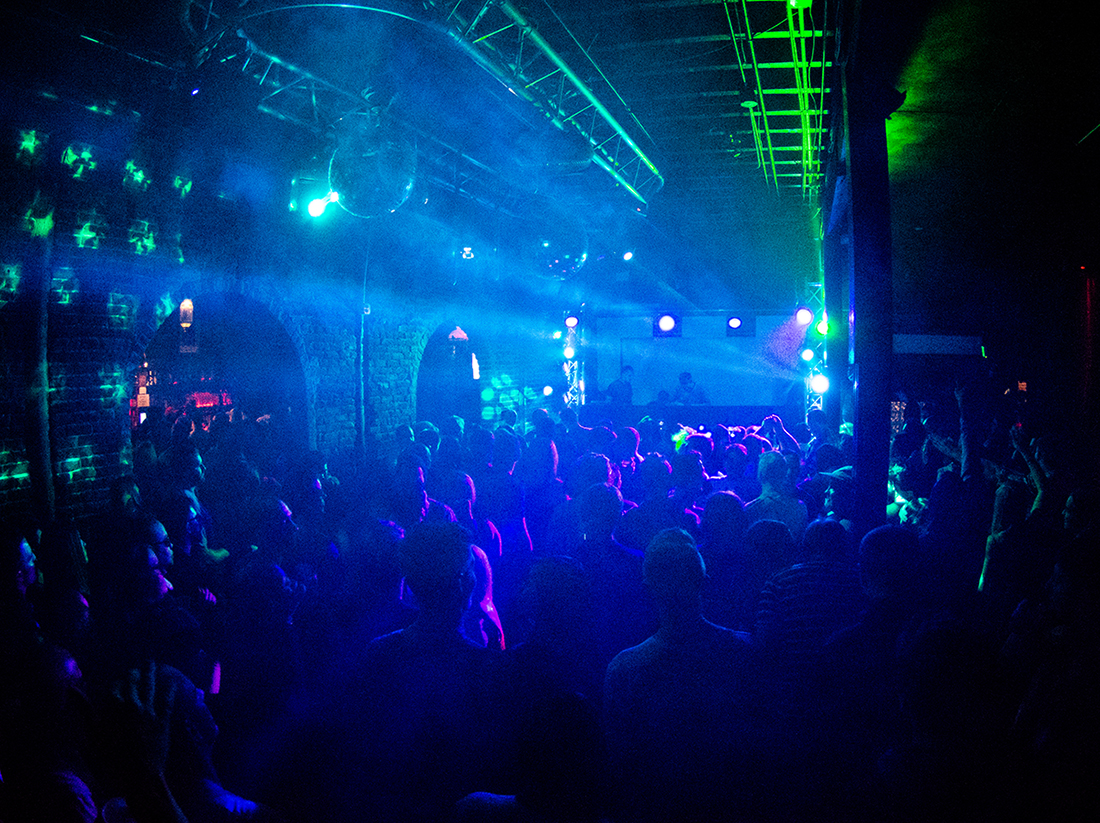 Bayer’s live show, like many of the bigger-name DJ/producers, is somewhat uneventful visually. There are some lovely CGI fluid projections behind him and the venue has lights, fog, and all the other things you expect at a high-end dance club but as far as performing goes, these guys basically stand there, flip switches, and read the crowd. Occasionally they hold their arms out or raise the roof but this sort of stage work is very much about the mood and the music. Speaking of which, Bayer’s music is notably better than most of his contemporaries: he seems to understand how to create drama and expectation at the outset, using washes of sound and simple melodies not unlike good film scores. “Do Androids Dream part 1” is ample evidence, both of setting the stage and Bayer’s ability to utilize calm as well as energy. The result of adding these two elements, unusual in so much techno, is clear once the beat on “Do Androids Dream part 2” hits the crowd. They’re visibly amped up, anticipation heightened by Bayer’s ability and willingness to burn slow. Once then, Bayer expertly keeps the crowd up and pumping; the packed room didn’t stop bouncing until the set ended.

Bayer’s music is expertly crafted for the purpose but many of the tropes typical of techno and trance are there, from vocal snippets of popular songs threaded into 120BPM tracks to the slow rise high-pitched synth into a low bass throb. (Bayer uses a healthy chunk of New Order in some sets and I don’t imagine half the crowd recognizes it as such; he’s a savvy sampler, mores than most.) Some clichés work better than others and Bayer is creative enough to use these as accents rather than the core of his set. Maybe rather than refer to them as cliché, they should be considered tropes. Just as rock has the guitar or drum solo, techno has these interludes, so it’s less a matter of whether or not they happen but how well they’re executed. Bayer’s sets run 70-75 uninterrupted minutes and includes enough of these elements to satisfy the mainstream crowd but in an interesting way. He’s not afraid of quieter interludes. Rather, he uses them to introduce or frame his original work.

The primary difference between what Bayer does and what, say, Portland techno artist Sean Pierce does comes down to intention and effect. Both produce highly danceable techno, yet Bayer seems to have an element of practicality to his work. Beyond artistic expression, Bayer understands the mechanics and necessity of getting, and keeping, large crowds invested. His sets create an arc that invites, then maintains, movement. All DJ/producers do, but some do it far better than others; Bayer is in that camp. There’s nothing on Pierce’s excellent new EP Transit that wouldn’t work in the context of a larger set in any dance club. But my guess is that Bayer may not enjoy the more intimate venues Pierce currently plays. Andrew Bayer’s music is for vast spaces, large crowds, and mass communication. He’s good at what he does.

A set very close to what Bayer played at Whiskey Bar can be heard here.