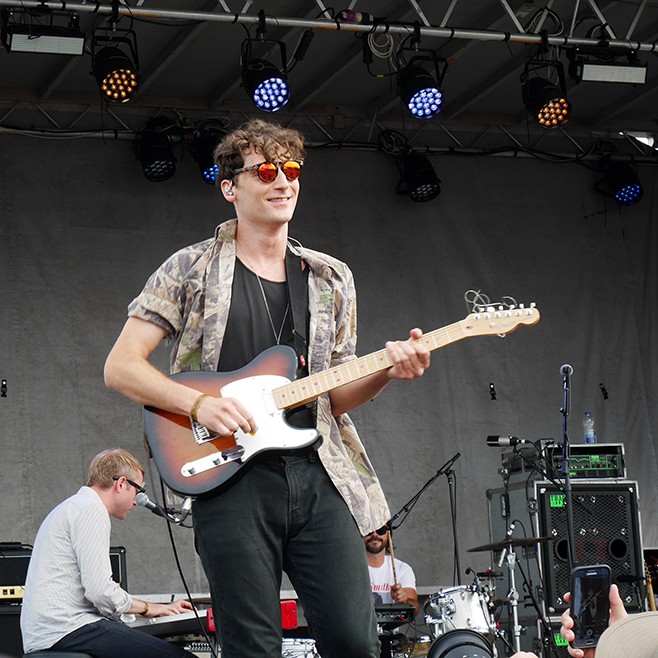 Note from the editor: this season’s NXNE was a unique one. Thinly spread out over the week the festival brought a much smaller line up with fewer shows and most major showcases located on the East Harbour over an open space asphalt where the Sound Academy use to be. A festival within a festival some people called it this location proved to be difficult to get to, despite the “free” JuJu ferry service. Most shows started early, ended early and hardly any of them filled rooms. It was not quite what Toronto is use to when it comes to NXNE so hoping that it was one small glitch in the history of the festival that will never repeat itself we proceeded to look for something good to listen to.

The Joy Formidable at The Mod Club

It’s hard to believe it’s been almost 10 years since The Joy Formidable first got their start. Following the release of the alt-rock Welsh band’s third album, Hitch, earlier this year, the musical trio – comprised of Rhiannon “Ritzy” Bryan (lead vocals/guitar), Rhydian Dafydd (bass, backing vocals), and Matthew James Thomas (drums, percussion) – took over The Mod Club stage during Toronto’s annual NXNE festival. Playing in one of the festival’s larger enclosed venues, (hooray for A/C!), the band drew a sizeable crowd, most of whom seemed to be vetted fans, singing along with tracks old and new. Delivering an energetic set with a consistent voltage from beginning to end, the band’s shoegaze sound – similar in style to Camera Obscura – literally rocked the house. Rounding-out their show with “Whirring”, perhaps one of the band’s most popular tracks and a bonafide crowd-pleaser, the Joy Formidable proved to be an engaging, down-to-earth band with a proven ability to produce and perform. 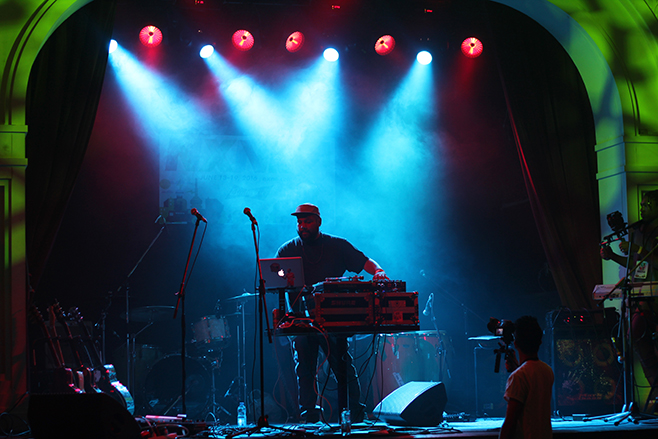 NXNE’s Indigenous Showcase, co-presented by iNATIVEfest and Gunner Records, was a curated set of upcoming and established Indigenous artists, playing against the grandeur of The Great Hall. The night kicked-off with DJ Shub, aka Dan General, formerly of A Tribe Called Red. Crafting a huge sound for just one artist, Shub’s electric hooks harkened back to his Tribe Called Red days, by merging traditional Indigenous music with heavy beats. Cranking-up the electro-influence, the encompassing beauty of traditional singing echoing throughout the Hall was undeniably inspiring, and even spiritual. Shub also managed to weave-in a few contemporary(ish) artists, including Adele and Mark Morrison.

Next up was Mariame, a Cree-Algerian singer, born and raised in Montreal, with a striking physical (and, at times, even vocal) resemblance to late songstress Selena Quintanilla. Playing a stripped-down set with only a laptop as her accompaniment, Mariame’s clear, powerful vocals rocked the Hall in a truly refreshing style. In fact, it almost felt as if Mariame teleported straight out of the late ‘90s, channeling a hip-hop, love ballad vibe à la Aaliyah or Mya. Despite lacking an instrumental presence, she offered a beautiful blend of pop songs, both original and covers.

Third in the Indigenous Showcase was Shawnee, a Mohawk singer originally from Welland, Ontario. Joined onstage by a rad four-piece band – two women and two men – the firecracker musician, decked-out in a Sgt. Pepper flaming red jacket, brought a roots-infused rock ‘n roll sound that landed somewhere between Amanda Marshall and Melissa Etheridge (unsurprisingly, one of her largest influences). Despite facing a sparse crowd, a common state throughout the night, Shawnee delivered a power-packed show that filled the house with serious sonic energy.

Dan Mangan, The Zolas, and Mother Mother at the Port Lands

Nestled in a parking lot, just south of the Gardiner Expressway, the NXNE Port Lands shows unfolded beneath a blazing summer sun.

Vancouver-based Dan Mangan managed to cool things down – in vibe, at least – by playing a set that included a chronology of emotive tracks off his past albums and EPs. With a distinct edge to his voice – a grit that is truly captivating in its strength – Mangan and his band drew a sizeable crowd that was happy to stand, sway, and lounge on beanbag chairs scattered throughout the lot. Highlighting with “Pine for Cedars”, a track from his 2009 album, Nice, Nice, Very Nice, and “Rows of Houses”, off his 2011 LP, Oh Fortune, plus a sweet birthday shout out to Mangan’s dad, the show was a standout from the day’s performances.

Another melodic squad from Van-city, The Zolas took over the southerly stage following Dan Mangan. Crafting an authentically laidback, West Coast tone through both their sound and onstage presence, the four members kept the crowd lax, hitting a sweet chord with cosmic indie ballad, “Ancient Mars”. A group that’s gained significant traction since releasing their first album in 2009, these guys have managed to remain consistent through their music, including on their most recent LP – Swooner. All-in-all, a pleasure to watch live, particularly with a cider in-hand.